Like so many, I was shocked and dismayed by the results of the 2016 Presidential Election. When I finally went to bed after listening to Trump’s victory speech, I felt numb and depressed. This could not possibly be happening.

After struggling with this sense of doom for another two days, I decided to take my feelings to my most trusted spiritual advisor, The I Ching. The I Ching showed me how to understand the election of Trump in a new way. I wish I had done the reading sooner. I could have saved myself from a lot of negative energy. I hope that by describing this reading here, I can help others deal with their pain as well.

There are a number of approaches people use to “do” I Ching readings. I use an approach called the Stone Protocol which uses 49 small stones to conduct a reading. I conducted the reading at 11:00 PM on November 10, 2016.

The question I asked the I Ching was on behalf of all who feel lost: “For those of us who are frightened by the 2016 election, how are we to understand the election of Trump as President of the United States?”

The response I was given was Archetype 19 (Approach) with moving lines in the first and second position resulting in Archetype 2 (Wisdom). This reading is shown diagrammatically in the following illustration. 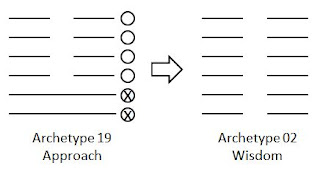 The scripture reading associated with Archetype 19, the starting archetype, is the story of Moses and the Burning Bush as told in Exodus 3:1-6:

Moses was keeping the flock of his father-in-law Jethro, the priest of Midian; he led his flock beyond the wilderness, and came to Horeb, the mountain of God. There the angel of the Lord appeared to him in a flame of fire out of a bush; he looked, and the bush was blazing, yet it was not consumed. Then Moses said, “I must turn aside and look at this great sight, and see why the bush is not burned up.” When the Lord saw that he had turned aside to see, God called to him out of the bush, “Moses, Moses!” And he said, “Here I am.” Then he said, “Come no closer! Remove the sandals from your feet, for the place on which you are standing is holy ground.” He said further, “I am the God of your father, the God of Abraham, the God of Isaac, and the God of Jacob.” And Moses hid his face, for he was afraid to look at God.

Since I asked the question on behalf of all who are shocked at the election, we start by asking who we are in this story. It is clear to me that we are Moses. Moses was at the lowest point in his life at the time of this reading. He had been forced to give up everything he held precious and flee to a strange land with strange customs and stranger Gods. This describes many of us. We are wandering in a land we no longer know feeling we have lost everything we once held precious.

However Moses/us is not going to be allowed to wallow in self-pity. God is about to call Moses/us into action. God is about to tell Moses to go back to Egypt and lead God’s people from oppression to freedom. Since we are Moses in this reading, God is calling us to also take an active role in liberating God’s children from oppression It isn’t hard to imagine which of God’s children are likely to be oppressed. Trump has given us a long list from which to choose.

Like Moses, we are probably not overjoyed at the prospect of following this call. After all, who wants to take on the wrath of Pharaoh? But God will have none of that. God does not want the children of God left in oppression, and Moses/we are being told to do something about it.

The Archetype description gives us more information about what to expect. It says:

The forces acting on us are described in the moving lines. We have two, in the first and second position. Here is what the I Ching tells us about the first line:

MOVING LINE IN THE FIRST POSITION
A moving line in the bottom position suggests Wisdom is beginning to prevail and will strike a chord in upper circles. This encourages the able. It is appropriate to join in the momentum, but one must stay grounded in Wisdom and not allow Ego to get out of control.

This last sentence is important. Many of us are reacting to the election out of hurt and wounded Ego. We are unfriending people and attacking those with whom we disagree. This is not the way we are called to action. We are called to action that is always grounded in Wisdom and love.

Here is what the I Ching tells us about the second moving line:

MOVING LINE IN THE SECOND POSITION
A moving line in the second position says that when one is invited to approach by God and is grounded in strength and Wisdom, a good outcome is likely. There is no need to worry about the future. Of course, everything is transitory, and what goes up must eventually come down. This is just the way things are. For now, things are moving in a positive direction, and as long as they remain guided by Wisdom, things will move forward. Everything suggests the path will be traversed swiftly, honestly, and bravely.

Remember this positive outcome is promised only if we act out of Wisdom and love rather than Ego and anger.

As you can see, the two moving lines are positive. Wisdom is on our side. A good outcome is likely. But we are warned, and this warning is reemphasized: we must respond from a place of Wisdom rather than Ego.

Okay, so we are starting from a state of despair. We are called to take positive actions to confront evil and help liberate the oppressed. We have positive energy flows to help us along. Wisdom is on our side, if we will just listen to her. Where will this lead us?

This leads us to Archetype 2, Wisdom. Wisdom is one of the most positive archetypes in the I Ching. The scripture reading for this archetype comes from Proverbs 8:22-29. It describes Wisdom, God’s trusted companion:

The Lord created me [Wisdom] at the beginning of his work,
the first of his acts of long ago.
Ages ago I was set up,
at the first, before the beginning of the earth…
Happy is the one who listens to me,
watching daily at my gates,
waiting beside my doors.
For whoever finds me finds life
and obtains favor from the Lord.

The description of this archetype is equally positive:

So let me summarize what this reading is telling us. Yes, things are bad. Our sisters and brothers are being and will be oppressed. We are not to sit around on our butts whining. We are to take an active role in liberating our sisters and brothers from this oppression. We have Wisdom to draw on and God showing us the way. If we can hold Ego at bay (and this is a big if) the outcome will be tremendously positive. We will see the earth renewed. We will experience a “great love that is not bound by place or space.” We will “dance in the presence of God.” Yes, we will need to make serious sacrifices, but look at the tradeoff. We are asked to give up a world made broken by hate. We are offered a world made whole by love.

Let me add a cautionary note. The I Ching does not predict the future. It tells us about the future God is calling us to create. But whether that future is in fact created is up to us. We have free choice. We can choose to follow God’s call or we can choose to ignore it. If we ignore it, then God’s desired future will not be our future. Our future will be something else.

Thanks to the I Ching, I no longer see Trump as an enemy. I now see Trump as an opportunity to bring about some amazing and wonderful changes in our world. Let us go forth and embrace this challenge with love and humility. May God be with you, today and always.

Roger Sessions is a Spiritual Director commissioned by the Episcopal Church, a Benedictine Oblate associated with the World Community for Christian Meditation, and the author of Wisdom’s Way - The Christian I Ching. He lives in Austin, Texas and can be contacted at roger.sessions (at) gmail.com.

Posted by Roger Sessions at 4:31 AM